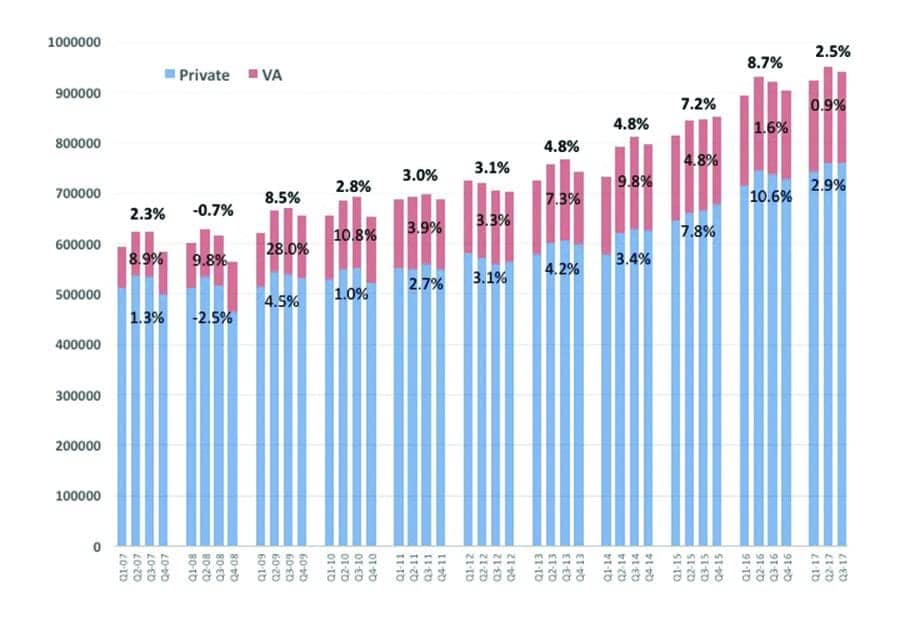 Hearing aid unit sales in the United States remained relatively flat in the third quarter (Q3) of 2017, compared with the last four years, but still within historical growth norms, according to statistics generated by the Hearing Industries Association (HIA), Washington, DC. In the third quarter of 2017, private sector unit sales of hearing aids increased by 2.8%, VA dispensing fell by 1.3%, and the total market gained 2.0% in unit volume compared to the same period last year. 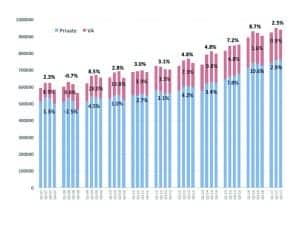 Figure 1. [Click on image to enlarge.] Quarterly US net unit hearing aid sales for the private/commercial (blue) and VA (red) markets, with year-on-year percentages for each and overall sales increases in bold at the top. Source: HIA.

Historically, hearing aid unit sales have increased by about 2-4% per year. Thus, the recent HIA statistics for 2017 are trending toward the low side of these norms. But they’re also following 4 years of strong growth (5-8% unit increases) from 2013-2016—sales growth that many in the industry (including certain editors) have largely attributed to the aging Baby Boomer population. As mentioned in previous HR analyses, there are several mitigating factors involved in these recent HIA statistics, including the addition in 2016 of two new reporting members, as well as the distribution power of mass retailers being included in the private sector sales statistics.

The takeaway is that 2017 hearing aid sales are not as strong as might have been anticipated. Anecdotal reports from the field point to a range of mildly good to mildly poor years for independent dispensing businesses. With what appears to be a strong economy, the reason for a slight downturn in hearing aid sales is unclear. Possible explanations include the current turmoil in Washington, consumers’ uneasiness with  ongoing healthcare changes, the recent hurricanes in Q3, or consumers sitting on their hands in anticipation of an over-the-counter (OTC) class of hearing aids.  Considering that average selling prices (ASPs) of hearing aids have been decreasing by 1-2% annually, the gross revenue of an average practice is likely to be at about the same level as in 2016.