Woodstock, NY — Hearing aid and audio innovator Edgar M. Villchur died on October 17, 2011, at his Woodstock, NY home. He was 94. Villchur is known for developing the acoustic suspension loudspeaker in 1954, which revolutionized the field of high-fidelity audio. He is also well known for developing hearing aids with multichannel compression that utilized wide dynamic range compression (WDRC).

Villchur’s 1954 invention of the acoustic suspension loudspeaker revolutionized the field of high-fidelity equipment, providing better bass response than was previously possible, at the same time radically reducing the size of the cabinet. He received a patent for that invention as well as for the dome tweeter, which greatly improved the ability of loudspeakers to reproduce accurate high-end sounds. His AR-3 speaker is on display in the Smithsonian Institution’s Information Age Exhibit in Washington, DC.

At Acoustic Research Inc (AR), which he co-founded with Henry Kloss, Villchur served as president from 1952 to 1967, and manufactured high-fidelity loudspeakers, turntables, and other stereo components of his design. After leaving AR in 1967, Villchur went into hearing aid research and developed the multichannel compression hearing aid, whose basic design has become the industry standard.

Villchur received his Master’s degree from City College, New York, in art history, and was headed for a career as a scenic designer. Then World War II changed those plans, and he was trained in maintenance and repair of radios, radar, and other equipment. He was stationed in New Guinea, where he rose to the rank of captain and was in charge of the electronic equipment for his Army squadron. Later, he served in the Philippines and on Okinawa.

After the war, he opened a shop in Greenwich Village, where he repaired radios and built custom home high-fidelity sets. At the same time, Villchur continued to educate himself in the area of audio engineering, taking night courses in mathematics and engineering. After submitting an article to Audio Engineering magazine (later renamed Audio), he was asked to write a regular column. He also taught a course in his special area of interest, Reproduction of Sound, at the night school at New York University.

By the end of his life,  Villchur had authored three books and over 150 articles on acoustics and sound reproduction, and he continued to write into his 90s. (He was also a contributor to HR, most recently in 2008.)

Although Villchur considered himself a scientist and a researcher, he was reportedly also very successful as a businessman. As president of AR, he was known for progressive employment practices and innovative advertising techniques. AR used equal opportunity employment practices, and employees received health insurance and profit sharing—benefits that were highly unusual in any but the largest firms in the 1950s and 1960s. The company was also known for its liberal repair policies, fixing most products for free no matter how old they were and, in general, providing excellent customer service. AR’s advertising was distinct from the sensationalistic ads of its competitors, instead concentrating on technical information, reviews by impartial critics, and endorsements from well-known musicians and other personalities who actually used Acoustic Research components.

In 1967, Villchur sold AR to Teledyne, and went back to working as a researcher. He chose the field of hearing aids, since he felt that there was considerable room for improvement in these devices. He spent several years investigating the problem in his home laboratory in Woodstock. By 1973, he had come up with multichannel compression, a revolutionary concept in hearing aid design.

Rather than apply for a patent, he decided to publish his findings and make them available to anyone who wanted to use them. GN ReSound subsequently worked with Villchur to produce a compression hearing aid, and over the next two decades, his design became the industry standard.

Villchur lived in Woodstock from 1952 until his death. Music and art were very important to him, and he served on the boards of Maverick Concerts and of the Woodstock Artists’ Association for many years. He was a friend, advisor, and benefactor to countless organizations and individuals in the community.

He is survived by his wife, Rosemary (Romy) Villchur, to whom he had been married for 66 years; his son, Mark Villchur of Boston; his daughter, Miriam Villchur Berg of Woodstock; and many devoted friends who considered themselves, and were considered by him, members of his family.

For more information, see the Wikipedia article “Edgar Villchur” and its accompanying bibliography and links, as well as his personal website, www.edgarvillchur.com. 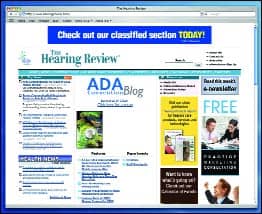