A study recently published in the online journal PLOS ONE shows that among 74 subjects fitted with a linear octave frequency transposition (LOFT) hearing aid, 60 (81%) reported partial or complete tinnitus suppression during the day and night.

Over the course of the 3-year period, the authors report that the effects continue after several months or years of daily use.

Of the total 74 subjectsfitted, the authors obtained quantified measures of tinnitus suppression from 38 through visual analog scaling and several additional psychoacoustic and audiometric measures. For these subjects, the long-term suppression appears to be independent of age, duration of therapy, and subjective localization of tinnitus. A small but significant correlation was found with audiogram losses, but not with high frequency loss slope.

Long-term tinnitus suppression was observed for different etiologies, but there appeared to be a low success rate for sudden deafness. A majority of tested subjects (23) had a history of noise exposure.

Tinnitus suppression started after a few days of LOFT hearing aid use and reached a maximum effect after a few weeks of daily use. For nine subjects, different amounts of frequency shifting were tried and found to be “more or less successful” for long-term tinnitus suppression; however, no correlation was found with tinnitus pitch.

For about one third of the 38 subjects, a classical amplification or a non-linear frequency compression hearing aid was also tried, but no such tinnitus suppression was observed.

The entire study is available for free on the PLOS ONE website. 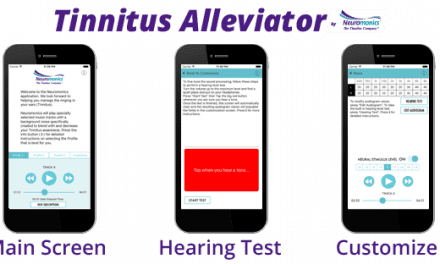