According to a new study conducted by House Research Institute (HRI) researchers, 72% of teenagers participating in a study experienced temporary reduced hearing ability following exposure to a pop rock performance by a popular female singer.

M. Jennifer Derebery, MD, House Clinic physician, along with the House Research Institute tested teens’ hearing before and after a concert and presented the study findings at a recent American Otologic Society meeting and that also will be published in an upcoming issue of Otology & Neurotology.

The hearing loss that may be experienced after a pop rock concert is not generally believed to be permanent. It is called a temporary threshold shift and usually disappears within 16-48 hours, after which a person’s hearing returns to previous levels. However, repeated exposures to the same levels may cause permanent damage.

“Teenagers need to understand a single exposure to loud noise from either a concert or personal listening device can lead to hearing loss,” said Derebery, lead author. “With multiple exposures to noise over 85 decibels, the tiny hair cells may stop functioning and the hearing loss may be permanent.”

In the study, 29 teenagers were given free tickets to a rock concert. To ensure a similar level of noise exposure for the teens, there were two blocks of seats within close range of each other. The seats were located in front of the stage at the far end of the venue approximately 15 to 18 rows up from the floor.

Parental consent was obtained for all of the underage study participants. The importance of using hearing protection was explained to the teenagers. Researchers then offered hearing protection to the subjects and encouraged them to use the foam ear plugs. However, only three teenagers chose to do so.

Three adult researchers sat with the teenagers. Using a calibrated sound pressure meter, 1,645 measurements of sound decibel (dBA) levels were recorded during the 26 songs played during the 3-hour concert. The sound levels ranged from 82 to 110 dBA, with an average of 98.5 dBA. The mean level was greater than 100 dBA for 10 of the 26 songs.

The decibel levels experienced at the concert exceeded what is allowable in the workplace, according to the Occupational Safety and Health Administration (OSHA). OSHA safe listening guidelines set time limits for exposures to sound levels of 85 dB and greater in the workplace. The volumes recorded during the concert would have violated OSHA standards in less than 30 minutes. In fact, one third of the teen listeners showed a temporary threshold shift that would not be acceptable in adult workplace environments.

Following the concert, the majority of the study participants also were found to have a significant reduction in the Distortion Product Otoacoustic Emissions (OAE) test, which checks the function of the outer hair cells in the inner ear that are believed to be the most vulnerable to damage from prolonged noise exposure.

Researchers are especially concerned, because in the most recent government survey on health in the United States National Health and Nutrition Examination Survey (NHANES) 2005-2006, 20% of adolescents were found to have at least slight hearing loss, a 31% increase from a similar survey done from 1988 to 1994.

Derebery and the study co-authors would like to see concert promoters and the musicians themselves take steps to lower sound levels as well as encourage young concert goers to use hearing protection.

The study was funded through the House Research Institute’s national teen hearing loss prevention initiative, It’s How You Listen that Counts®, as part of its broader Sound Partners hearing conservation education program. 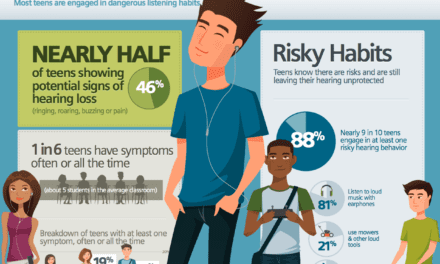