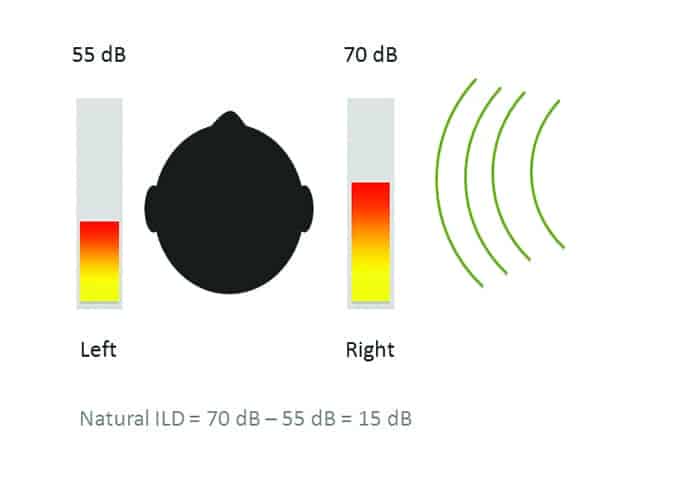 Localization is the ability to tell the direction of a sound source in a 3-D space. The ability to localize sounds provides a more natural and comfortable listening experience. It is also important for safety reasons such as to avoid oncoming traffic, an approaching cyclist on a running path, or a falling object. Being able to localize also allows the listener to turn toward the sound source and use the additional visual cues to enhance communication in adverse listening conditions.

Hearing loss results in a reduction of localization ability1; however, the use of amplification may not always restore localization to a normal level. Fortunately, the application of digital signal processing and wireless transmission techniques in hearing aids has helped preserved the cues for localization.

How Do We Localize?

A sound source has different temporal, spectral, and intensity characteristics depending on its location in the 3-D space. A listener studies these characteristics (which are described as cues) originating from all directions on the horizontal and the vertical planes to identify the origin of the sound.

Monaural versus binaural cues. Because localization typically involves the use of two ears, people with hearing in only one ear (either aided monaurally or single-sided deafness) should have extreme difficulties on localization tasks. However, some people in this category still report some ability to localize. Frequently, a person moves their head/body to estimate the direction of a sound. The overall loudness of the sound and the spectral change of the sound as it diffracts the pinna from different orientations act as cues. This spectral cue relies on a stored image of the sound, so cognition is involved with monaural cues.3

Is Localization a Problem?

Prevalence and ramifications. One conclusion from almost every study is that hearing-impaired people have poorer localization ability than normal-hearing people. The use of amplification may improve localization in that it provides the needed audibility. However, it is common to find that aided localization is poorer than unaided localization when tested at the wearer’s most comfortable listening level (ie, audibility is not involved).

These observations were replicated in our internal study at the ORCA-USA facility. Figure 1 shows the accuracy of localization for sounds presented from 12 azimuths in the unaided condition at a 30 dB SL (sensation level) in 15 experienced hearing aid wearers. For ease of presentation, the results across the 12 loudspeakers were collapsed to only front, back, left, and right quadrant scores. The results of using two scoring criteria were reported: “0 degree” criterion requires absolute identification and a “30 degree” criterion suggests that the subjects’ response may be ±1 loudspeaker from the target sound source.

Several authors have suggested that being able to focus one’s attention to a sound source in an adverse listening environment (eg, cocktail party) may help improve speech understanding and communication.6,7 Furthermore, Bellis4 indicated similar processing mechanisms are used in the brainstem for speech in noise task and localization task. There have been bimodal studies8 (eg, one cochlear implant and one hearing aid) that demonstrated a significant correlation between localization ability and speech recognition in bimodal and bilateral cochlear implant subjects. If this can be generalized to other hearing-impaired patients, it would suggest that an improvement in localization could result in an improvement in speech understanding in noise or communication in adverse listening conditions. It is unclear if improving speech-in-noise performance may lead to an improved localization performance. Currently, neither one of these hypotheses has been validated.

1) Hearing aids cannot overcome the effects of a distorted auditory system. Hearing loss is not simply a problem of sound attenuation or loss of sensitivity; it is also a problem of sound distortion. While a properly fit hearing aid may overcome the loss of hearing sensitivity and improve localization because audibility is restored, the effect of the distortion still lingers. Such distortion may affect the integrity of the aided signal reaching the brain, rendering the effective use of the available cues impossible or suboptimal.

2) The wearers have developed compensatory strategies. Hearing loss deprives the brain of the necessary acoustic inputs. This would lead the listeners to develop alternative compensatory strategies that do not require the “correct cues.” They may use other sensory modalities (eg, head and body movement, visual searching) to help them localize. Thus, the newly amplified signals may not be “recognizable” to the brain. This would lead to continued localization errors unless the brain is retrained to interpret the new input.

For example, Hausler et al10 reported degraded localization in people with conductive hearing loss, and that such abnormality persisted for some time after hearing thresholds were returned to normal through surgery. The new cues could be useful when the wearer has learned a new strategy to use the available cues.

3) Loss of natural cues, including:

The components of a hearing aid (including the DSP chip) could introduce delay to the processed signal. The impact of the delay is minimal if the extent of the delay is identical between ears. However, if the delay is different between the two ears, the time of arrival (or phase) will be different, and that may result in a disruption of the localization cues.

Hearing aids that destroy this pinna cue could result in front/back localization problems. Because the microphones of a BTE/RIC are typically over the top of the ear and are not shadowed by the pinna, wearers of BTE/RICs are more likely to be deprived of this pinna cue. Because the microphones of custom products (CIC/ITE/ITC) are at the entrance of the ear canal and are shadowed by the pinna, it is likely that wearers of these hearing aid styles will still retain the pinna cues. Indeed, Best et al13 compared the localization performance of 11 listeners between BTE and CIC fittings and found fewer front/back reversal errors with the CIC than the BTE. The loss of pinna cues could affect a significant number of hearing aid wearers because over 70% of hearing aids sold in the United States are BTE/RIC styles.14

So, What Can Be Done to Improve Localization?

Figure 4. In-situ directivity index (DI) of an omnidirectional microphone on a BTE, of the natural ear with pinna, and of the pinna compensation algorithm microphone system used in the Dream.

One must provide the necessary acoustic cues so the impaired auditory system has as much accurate information to process as possible. Appropriate training may be necessary to retrain the altered brain to interpret the available information.

1) Bilateral hearing aid fitting. The first and most important requirement to receiving binaural cues is to wear hearing aids on both ears. In addition, the hearing aids should be very similar to avoid mismatching between devices, which can create unnecessary differences in delays.

Korhonen et al16 studied the impact of the inter-ear compression on trained hearing impaired subjects’ ability to localize sounds (n=10). The comparison was made to a BTE with an omnidirectional microphone. The use of IE reduced the error rate of localizing sounds to the sides by 7.3°.

In the Dream hearing aid, the Digital Pinna feature has a DI of around 4 dB from 2000 to 4000 Hz to restore the pinna shadow. Kuk et al17 reported that the digital pinna algorithm was able to improve front/back location from 30% to 60% over an omnidirectional microphone condition.

Van den Bogaert et al19 also showed that ITC and ITP (in-the-pinna) hearing aids have less front/back confusion than BTEs. However, BTEs with a directional microphone were able to preserve some front/back localization.

4) Use of slow-acting compression. One can preserve the natural interaural level difference by keeping linear processing in both hearing aids. This could preserve the intensity differences between ears. However, the disadvantage of a linear hearing aid is that softer sounds will not be audible and the louder sounds may be too loud or it may saturate the output of the hearing aid.

An alternative is to use slow acting WDRC (SA-WDRC). This will keep the short term envelope of the input signal (ie, linear processing) while the hearing aids adjust their gain according to the long term input. This preserves the ILD and the interaural cues. A SA-WDRC also has the advantage of a more natural sound quality.20 It is noteworthy that Widex has been using SA-WDRC since it first introduced the Senso digital hearing aid in 1996.

5) Broad bandwidth and open fit. The use of open fitting allows the natural diffraction of sounds within the concha area and preserves any cues that are used for vertical localization.21 The use of hearing aids with a broad bandwidth (eg, Dream 4-m-CB or Dream Clearband that yields in-situ output up to 10 kHz) provides audibility of high frequency sounds that may help localization.

Unfortunately, an open-fit hearing aid also limits the maximum amount of high frequency gain to less than 40 dB, even with the use of active feedback cancellation. Thus, the use of an open-fit broad bandwidth hearing aid is only possible for individuals with up to a moderate degree of hearing loss in the high frequencies (around 60-70 dB HL at 4000 Hz).21,22

In summary, the use of bilateral wireless hearing aids that exchange compression parameters between ears of the custom style (CIC, ITE/ITC) with a large vent and a broad bandwidth should provide the best potential to preserve any localization cues. The availability of a directional microphone may further enhance front/back localization. If BTE/RICs are desired, broadband bilateral wireless devices with inter-ear features and pinna compensation algorithm fitted in an open mode (or as much venting as possible) are appropriate. The addition of a directional microphone also enhances the effectiveness.

What else can be done to improve localization? Despite having the optimal acoustic cues, the brain may have been accustomed to the old pattern of neural activity so that the new cues may decrease performance. What needs to be available is rehabilitation programs that can instruct these wearers how to understand and utilize the new cues.

Wright and Zhang23 provided a review of the literature that suggests localization can be learned or relearned. The reviewed data indicated human adults can recalibrate, as well as refine, the use of sound-localization cues. Training regimens can be developed to enhance sound-localization performance in individuals with impaired localization abilities. This will be further discussed in a subsequent paper on the topic. 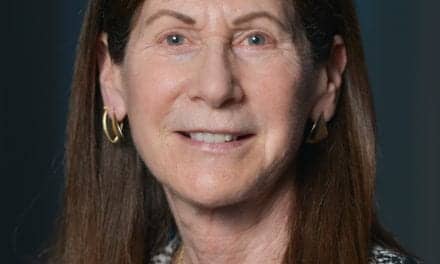 Beyond Controversies: The Science Behind Central Auditory Processing Disorder