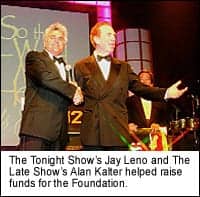 Starkey Hearing Foundation Raises Over $4.5 Million During Annual Gala Event
St paul, Minn—The Tonight Show host Jay Leno, who headlined The Starkey Hearing Foundation’s annual “So the World May Hear” Awards Gala on June 17, added an entertaining item to the live auction he was hosting. While on stage, he called Alan Kalter—known as the “voice” of The Late Show with David Letterman—onto the stage to pose for a photo which he then auctioned off twice for $7,000 apiece. Leno, hilariously improvising throughout the charity auction portion of the event, at one point bounded into the crowd and had Willie Mays sign a saucer, then proceeded to auction it off for $40,000. He also autographed his own shirt and sold it for $4,000. For the second year in a row, the evening raised more than $4 million for The Starkey Hearing Foundation, which travels the world donating hearing aids to underprivileged children.

The star-studded Gala, which included performances by Dionne Warwick, Kathy Sledge, Freda Payne, and Carl Carlton, concluded with a Father’s Day tribute by John Mellencamp. Mellencamp’s father is hearing impaired and, thanks to the younger Mellencamp, wears Starkey hearing aids. “The quality of my life has improved dramatically during the past 12 months that I’ve been using my Starkey hearing aids,” says Richard Mellencamp. “Thanks to my son John’s telling me about the work of [Starkey founder] Bill Austin, things have really changed for the better.”

Since 2000, The Starkey Hearing Foundation has provided more than 150,000 hearing aids to those in need around the world, donating more than 20,000 each year. For more information, visit www.sotheworldmayhear.org.

Report Endorses Funding for Children’s Hearing Aids
The Children’s Audiology Financing Work Group, convened by the US Department of Health and Human Services, has issued its final report on the “financial barriers impeding timely access to hearing aids” for children. In addition to outlining the current state of funding (or lack thereof), for pediatric hearing aids, the Work Group made four policy recommendations:

While there is no specific “next step” for this report, it is expected to have a positive impact for children with hearing loss and the report should receive broad dissemination regarding the importance of hearing aids and the endorsement of digital hearing aids.

Widex Congress of Pediatric Audiology
Ottawa, Canada—-The 4th Widex Congress of Pediatric Audiology, held during May, was attended by over 300 hearing care professionals from 32 countries. This year’s Congress provided a multi-faceted look at current research and practice in pediatric audiology. The three-day forum—where specialists from all over the world met to exchange knowledge and ideas—served as a platform for furthering the advancement of this important area of hearing rehabilitation.

In all, 20 speakers presented at the Congress information ranging from auditory development and processing, and hearing aid fitting strategies for young children—all the way to hearing rehabilitation, hair cell regeneration, and management of hearing loss in the classroom.

Under the theme “Helping Children Hear Better,” the biennial Pediatric Congress is part of Widex’s continuing effort to give children with hearing loss the same opportunities for a full and active life as those with normal hearing.“ In order to best accomplish the goals of diagnosing hearing loss in young children and to provide appropriate services, it is essential that the clinical, scientific, and commercial sectors work together,” says Michael P. Gorga, PhD, director of the Clinical Sensory Physiology Laboratory at Boys Town National Research Hospital. “Widex, in my opinion, is one of the few companies that have put intellectual and financial resources into meeting that goal. The evidence is obvious in this series of conferences that they host on pediatric amplification. The congresses are fundamentally about understanding auditory function in infants and young children, trying to find ways to fit hearing amplification to those with hearing loss, and finding the optimal approaches to rehabilitation. Everybody benefits from that. This is not a hearing aid marketing conference. The commitment that Widex has shown to the development of scientific and clinical techniques is in many ways philanthropic. To me, that’s a really positive thing.”

“What is more important for the coming years than our children?” says Tom Westermann, executive vice president of Widex A/S. “We rely on their future capabilities to function in an increasingly complex and hasty world. We rely on their abilities to communicate and understand, so that we all can live in a peaceful and prosperous world. So we have to make an extra effort to give our children the maximum possibilities to perform. One of the platforms on which we develop our own skills to better help our children is to participate in discussion and learning forums such as this congress. We view the arranging of this congress as one of our most important tasks.”

Recognizing the growing need to focus on diagnostic tools to meet the unique needs of young children with  hearing loss, Widex plans to continue its commitment to enhance pediatric audiology and the way hearing care professionals work with children and infants, according to the company. The fifth Widex Congress of Pediatric Audiology will take place in Amsterdam in 2008.

Read about it on HR Online…
The Hearing Review presents news online everyday. Be sure to check out www.hearingreview.com for the latest information. News articles during the last month include: 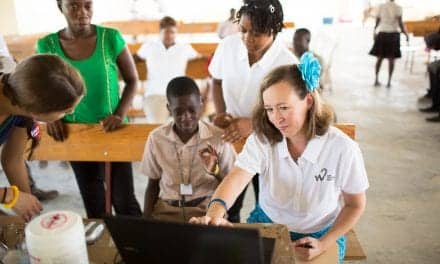