Children of pregnant women who have elevated thyroid peroxidase autoantibodies (TPOaAb) during the third trimester have an increased risk of sensorineural hearing loss (SNHL), according to a retrospective study by Dr Ellen Wasserman of the Johns Hopkins Bloomberg School of Public Health, Baltimore, and colleagues published in the March 15 edition of the American Journal of Epidemiology.

The study is said to be the first to evaluate the association between TPOaAb and SNHL, examining stored serum specimens drawn between 1959 and 1965 from pregnant participants in the National Collaborative Perinatal Project in Baltimore. Of the 1,736 children born within the study, 74 cases of SNHL were identified based on audiologic exams given to the children at the age of 8 years. The researchers conclude that, compared with 4.3% of all the children, 22.7% of the children whose mothers had elevated TPOaAb had SNHL.

The findings suggest that the fetal exposure during the third trimester to TPOaAb is somehow linked to impaired hearing or auditory development. The research team is now exploring whether the TPOaAb are related to hormone availability, act in some way on the developing child, or might signal other autoimmune responses that produce neurodevelopmental deficits.

Female Hormone Protects Against Hearing Loss in Women and Men

Furthermore, not only was ER-beta found in the ears of both male and female mice, but levels of the nerve-protecting protein BDNF were reduced in mice that lacked either ER-beta or aromatase.

The authors therefore concluded that this identification of an auditory-protective role for the estrogen receptor ER-beta may enable the development of new treatments for hearing loss. Source: American Academy for the Advancement of Science.

Repetitive Transcranial Stimulation for People with Tinnitus Has Potential

Repetitive transcranial magnetic stimulation over the left temporoparietal cortex may be a useful treatment for people who have tinnitus, suggests a preliminary study published in the February issue of the Journal of Neurology, Neurosurgery, and Psychiatry.

Dr Eman Khedr of Assiut University Hospital in Egypt and colleagues compared the effects of different frequencies of repetitive transcranial magnetic stimulation (rTMS) at three frequencies (1 Hz, 10 Hz, and 25 Hz) versus a sham treatment (occipital, 1 Hz) given daily for 2 weeks. These four treatment were randomly provided to 66 patients who had chronic tinnitus. Patients were assessed using the Tinnitus Handicap Inventory, self-ratings of symptoms, and audiometric measures of residual inhibition before, immediately after the 2 weeks’ treatment, and monthly for 4 consecutive months.

Compared with the sham treatment, all three treatment groups experienced a change. A two-factor ANOVA revealed a significant “rTMS” x “time” interaction, with the rTMS producing greater improvement than sham. However, there was no significant difference between the responses to different frequencies of rTMS. The response to rTMS depended on the duration of tinnitus, with patients having tinnitus for the longest periods being the least likely to respond.

The researchers conclude that daily sessions of rTMS over the temporoparietal cortex may be a useful potential treatment avenue for tinnitus.

A new study by researchers at UC Davis shows how our very short-term “working memory”—memory that allows the brain to stitch together sensory information—operates. The system retains a limited number of high-resolution images for a few seconds, rather than a wider range of fuzzier impressions. The paper is published online in the April 2 edition of Nature, and the work was supported by grants from the National Institute of Mental Health.

Humans rarely move their eyes smoothly. As our eyes flit from object to object, the visual system briefly shuts off to cut down visual “noise,” says Steven J. Luck, professor of psychology at the UC Davis Center for Mind and Brain. The brain gets a series of snapshots of about a quarter-second, separated by brief gaps.

The working memory system smoothes out this jerky sequence of images by retaining memories from each snapshot so that they can be blended together. These memories typically last just a few seconds. “We use working memory hundreds of thousands of times each day without noticing it,” says Luck. The system also seems to be linked to intelligence, he said.

They showed volunteers a pattern of colored squares for a tenth of a second, and then asked them to recall the color of one of the squares by clicking on a color wheel. Sometimes the subjects would be completely unable to remember the color, and they just clicked at a random location on the color wheel. When subjects could remember the square, however, they usually clicked on a color that was quite close to the original color.

Zhang developed a technique for using these responses to quantify how many items a subject could store in memory and how precise those memories were.

“It’s a trivial task, but it took us years to realize that we should use it,” says Luck. The researchers began the work at the University of Iowa; Luck moved to UC Davis in 2006, and Zhang in 2007.

People who can store more information in working memory have higher levels of “fluid intelligence,” the ability to solve novel problems, Luck says. Working memory is also important in keeping track of objects that are temporarily blocked from view, and it appears to be used when we need to recognize objects shown in unfamiliar views.

Work by Lisa M. Oakes, another psychology professor at UC Davis, and colleagues has shown that very young infants have fairly primitive working memory abilities. Between the ages of 6 and 10 months, however, they rapidly develop a much more adult-like working memory system.

Outside the visual domain, working memory is used for storing alternatives or intermediate values, for example when adding a string of numbers together, Luck says. It also appears to play an important role in learning new words, perhaps by allowing the sound of a new word to remain active in the listener’s brain until a long-term memory of the word can be formed.

Luck compared the working memory system to the internal memory registers on a computer chip that allow it to make a series of calculations in between referring to the main memory. Our more familiar long-term memory, in contrast, can be used to store large quantities of information for long periods of time, but it is accessed much more slowly, like a computer’s hard drive.

Luck and Zhang are now interested in how working memory operates in people with conditions such as attention deficit/hyperactivity disorder and schizophrenia, and those who have problems in perception and cognition. Source: UC-Davis.

The Reliability of Aided Sound-field Thresholds in Nonlinear Hearing Aids 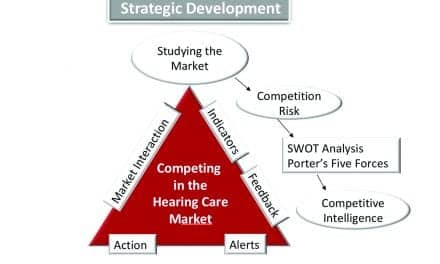