GN ReSound
GN ReSound announces the promotion of Mark Thelemann to Inside Sales Supervisor of the US market, and the appointments of Karie Andree, Anthony Stephenson, Bill Krantz and Nancy Kudanovych as Inside Business Development Consultants (IBDCs).

Thelemann was formerly IBDC of the southwest territory, and has 20 years of sales experience, 8 of which are industry related. He graduated from the University of Minnesota, where he received a BA in psychology.

Andree will oversee Idaho, Montana, Wyoming, North Dakota, South Dakota, Colorado, Northern California, Oregon, Washington and Alaska. She has received two bachelor’s degrees in elementary and special education, as well as a master’s degree as a reading specialist from the University of South Dakota.

Stephenson will take on the Central and South California, Hawaii, Nevada, Utah, and Arizona markets. He comes to GN ReSound from the financial industry, and attended Clark Atlanta University, as well as Georgia Tech University.

Krantz will be responsible for Iowa, Nebraska, Missouri, Kansas, Oklahoma, Arkansas, North Florida, South Alabama, South Mississippi and Louisiana. He received a BA in government affairs from St John’s University, and an MA in business marketing from Gonzaga University

Blair has re-joined GN ReSound as an OBDC for Central California, Nevada, Utah, and Hawaii. She graduated from San Jose State University with a BA in audiology and speech pathology.

Jaschke serves as OBDC for the states of Washington, Oregon, Northern California, and Alaska. She brings 8 years of dispensing audiologist experience, and graduated from California State University Sacramento with an MS in audiology.

Kleckner will handle Tennessee, Mississippi, Alabama, and Georgia. She brings 7 years of hearing health care experience to GN ReSound. She received her master’s of audiology degree from Northern Illinois University.

McMahon will be in charge of New York, New Jersey and Connecticut. She has been a practicing audiologist for the past 17 years. She graduated from the University of Connecticut with an MA in communication disorders.

Pearson will serve Nebraska, Iowa, Kansas, Missouri, Oklahoma, and Arkansas. Prior to joining GN ReSound, she worked for two years in private practice audiology. She graduated from the University of Wisconsin-Madison with an MS in communicative disorders. 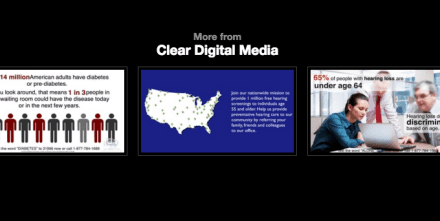 How to Turn a Waiting Room into a Patient Engagement Tool