Research in 2001 by Killion & Mueller suggests that hearing aids may be much older than initially suspected. In fact, newly unearthed findings suggest that some technologies may, indeed, be quite dated.

Fig. 1 (a GIF file showing rocks, or in this case, a GIFROC) exhibits fossilized remains of two types of hearing aids that may have been worn by our ancestors. The specimen on the left is clearly a CIC hearing aid which certainly predates those reported by Staab et al. The removal cord is missing, indicating that the fossil is probably older than the life-span of nylon. Of interest is that the receiver tubing of the CIC specimen is completely blocked, and this is consistent with some of the more modern CIC hearing instruments. No fossilized remains of batteries or a battery door were found at the excavation sites, suggesting that these hearing aids may have been solar powered.

The full-shell specimen in Fig. 1 (found at the Lake Superior site by the author’s daughter, Meredith) has well- defined markings on the faceplate (not shown). Ultra-violet examination reveals the writing to be “Rockstone 001”—a hearing aid not mentioned by Kenneth Berger in his book, History of Hearing Aids. Again, no fossilized battery remains were discovered, supporting the solar-powered conjecture.

A less plausible explanation is that these specimens are not hearing aids, but are custom hearing protection. Indeed, the full-shell fossil has an NRR of 12 dB. It is known, from my own work with musicians, that cavemen liked music—especially if it included drums. The cavemen may have been very conscious of protecting their hearing. In fact, there is some support among my colleagues for the theory that the full-shell specimen is a distant ancestor of the ER-15 earplug. Etymotic Research, however, has declined to comment.

Our team is currently excavating another unusual finding, which may turn out to be either a fossilized probe microphone or a suitcase. More on this as it develops.

Commentary from Wayne Staab, PhD:
Interesting perspective. The lack of a battery drawer could suggest that these specimens were solar powered hearing aids or even earplugs. On the other hand, the explanations could be figments of overzealous exploration. Do we even know that early ancestors heard?

In support, I am submitting some of my own “ear-related” findings (Figs. 2a-b) from an Arizona “dig” questioning the suggestions that the referenced objects were fossilized hearing aids. The ear is consistent with the differences in body size structure of early man (about 50% of a contemporary human ear). Notice that the fossilized ear (GIFEAR, or in this case JPEGEAR) in Fig 2a has only a couple of small openings in an area approximating the ear canal. When the “ear” is turned over (it was obviously severed by a sharp instrument, most likely during a skirmish with a warring clan), no opening exists (Fig. 2b).

The lack of an ear canal suggests that hearing may have developed over time, and possibly the reason some forms of early hominids became extinct is because they did not have hearing to realize when they were in danger! Or, it might be argued that this was merely a case of atresia, lending support to an assumption that there must have been outer ear defects even during prehistoric days, and the subject was victimized because of a lack of hearing (more support for “use it or lose it” theorists).

Or, did the tribes that used the GIFROC instruments win out over tribes having no hearing because they had this sense—albeit aided? And, did the GIFROC ancestors later become extinct themselves if these devices were used as earplugs, resulting in “selective hearing?” All very interesting questions… 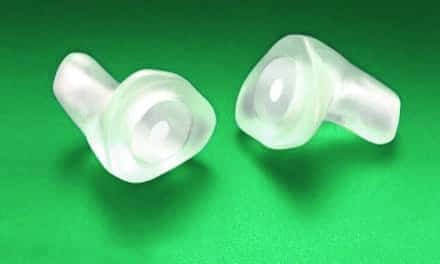