Although steroids are the most widely used treatment for sudden hearing loss, little scientific evidence supports their use or that of any other therapies for this condition, according to a systematic review and meta-analysis, both published in the June issue of Archives of Otolaryngology–Head & Neck Surgery.

Sudden sensorineural hearing loss (SSHL) is acute hearing impairment involving loss of at least 30 dB of hearing over at least 3 test frequencies occurring within 3 days. The condition affects about 5 to 20 of every 100,000 individuals yearly. Treatment varies widely and includes antiviral medications, vitamins, minerals, herbs, hyperbaric oxygen, and agents that dilute the blood.

“In addition, some otolaryngologists choose not to treat sudden sensorineural hearing loss at all, citing spontaneous recovery rates of 32% to 70%,” say authors Anne Elizabeth Conlin, MD, of the University of Ottawa, Ontario, and Lorne S. Parnes, MD, of the University of Western Ontario, London, Canada. “However, the most common approach to treatment of sudden sensorineural hearing loss in North America is with systemic steroids, which has been deemed by some authors to be the gold standard of treatment.”

The authors searched for all randomized clinical trials evaluating treatments for sudden hearing loss published between 1966 and 2006. For the systematic review, 21 trials were identified and evaluated, all of which used measures from hearing tests to define treatment outcomes. “Only two studies used identical criteria to define sudden sensorineural hearing loss,” the authors write. “The method of randomization was described in two studies. Validity scores ranged from 2 to 8 (of nine). Positive results were reported favoring systemic steroids, intratympanic [inside the inner ear] steroids, batroxobin, magnesium, vitamin E and hyperbaric oxygen, although there were serious limitations in each study with a positive finding.”

This includes the article cited as the landmark study for the use of steroids, which was not described as a randomized trial and therefore may have produced exaggerated treatment effects, the authors note. The authors suggest that this study also used inconsistent doses of steroids and did not measure outcomes at the same time for all participants. “The study therefore does not inform the otolaryngologist of what dose of steroids to use, nor at what time after treatment to expect improvement,” the authors write.

“To our knowledge, no valid randomized controlled trial exists to determine effective treatment of sudden sensorineural hearing loss,” they conclude. “Systemic steroids cannot be considered the gold standard of treatment of sudden sensorineural hearing loss, given the severe limitations of the landmark study supporting their use.”

For the meta-analysis, data from the same trials were combined when they covered the same therapies. Five trials were eligible for the analysis. “Pooling of data from two randomized clinical trials that compared steroids with placebo showed no difference between treatment groups,” the authors write. “No difference existed between patients treated with antiviral plus steroid therapy vs. placebo plus steroid therapy. Finally, there was no difference between subjects treated with steroids vs. subjects treated with any other active treatment.”

Treating sudden hearing loss is difficult because its cause is often unknown, the authors note. However, it is still important to identify the therapy that most benefits the patient. “At present, sudden sensorineural hearing loss remains a medical emergency without a scientific understanding of its cause or a rational approach to its treatment,” they conclude. Source: American Association for the Advancement of Science (AAAS)

Implanting a tiny, ultra-thin electrode array in the auditory nerve can successfully transmit a wide range of sounds to the brain, according to animal studies being conducted at the University of Michigan Kresge Hearing Research Institute.

If the idea pans out in further animal and human studies, profoundly and severely deaf people would have another option that could allow them to hear low-pitched sounds common in speech, converse in a noisy room, identify high and low voices, and appreciate music—areas where cochlea implants, though a boon, have significant limitations.

“In nearly every measure, these work better than cochlear implants,” says U-M researcher John C. Middlebrooks who led a study requested by the National Institutes of Health (NIH) to reevaluate the potential of auditory nerve implants. He collaborated with Russell L. Snyder of the University of California, San Francisco, and Utah State University. The two coauthored an article on the results in the June issue of Journal of the Association for Research in Otolaryngology.

The possible auditory nerve implants likely would be suitable for the same people who are candidates today for cochlear implants. Also, the animal studies suggest that implantation of the devices has little impact on normal hearing, offering the possibility of restoring sensitivity to high frequencies while preserving remaining low-frequency hearing.

Middlebrooks says it’s possible that the low power requirements of the auditory nerve implants might lead to development of totally implantable devices. If the initial success in animals is borne out in further tests, a human auditory nerve implant is probably 5 to 10 years away, he says.

The researchers used cats bred for laboratory use in their experiments. They measured brain processing of auditory signals in normal conditions, then compared deaf animals’ brain responses to sounds using cochlear implants and then the direct auditory nerve implants.

Although cochlear implants have been a tremendous benefit to individuals with severe hearing impairment, they are designed to stimulate the auditory nerve and other cells to produce a sensation of hearing; their location, separated from auditory nerve fibers by fluid and a bony wall, is a limitation. “Access to specific nerve fibers is blunted,” Middlebrooks says. “The effect is rather like talking to someone through a closed door.” With the new intraneural stimulation procedure, that effect is eliminated, and there are other technical advantages, too. “The intimate contact of the array with the nerve fibers achieves more precise activation of fibers signaling specific frequencies, reduced electrical current requirements, and dramatically reduced interference among electrodes when they are stimulated simultaneously,” Middlebrooks says.

Middlebrooks is working with U-M biomedical engineers on an intraneural device that can remain in place and be tested further in animals over the next 2 years. The devices need to be studied over time to see if they are safely tolerated by the auditory nerve. “If our work continues to go very well, we might begin human trials in no less than 5 years,” says Middlebrooks. Such a device might be used first in people whose cochleas are filled with bone and therefore aren’t eligible for a cochlear implant, or people whose cochlear implants are no longer effective.

Funding for the study came from the National Institute on Deafness and Other Communication Disorders (NIDCD), a division of the NIH.

A researcher at a national hearing conference presented data that predict 17% of people exposed to deployed airbags in American cars will suffer from permanent hearing loss. His data also show, contrary to what experts previously thought, airbag deployment is more hazardous to the ear when a car’s windows are rolled down.

The results were presented by auditory physiologist Richard Price at the National Hearing Conservation Association’s 32nd Annual Conference February 15-17 at the Hyatt Regency in Savannah, Ga. Price, who is a consultant at Auditory Hazard Analysis in Charlestown, Md, focused his presentation on the hidden auditory danger posed by everyday “impulse” noises. An impulse noise is a brief burst of sound such as a shotgun blast, as opposed to a continuous noise, such as the droning of a washing machine. Price said, in addition to the well-known dangers of impulse noises such as gunfire, minor events such as a hammer hitting a nail or even the sound of a baby’s rattle can produce hearing loss.

“The good news is almost all of this hearing loss is preventable,” Price says. “Wearing hearing protection, designing equipment better, and being aware of the problem can all contribute to preservation of hearing, our very precious resource.”

In Price’s study of car airbag deployment, he sought to determine whether the auditory danger was greatest in cars with the windows down or the windows up. Previously, experts thought rolled-up windows were more dangerous because they allow for higher pressure to be created inside the cabin. The research concludes, counterintuitively, that having car windows rolled up when airbags are deployed is actually less hazardous to the ear than rolled-down windows. This is because the higher pressure generated in the closed cabin actually prevents greater damage to the ear. The pressure causes a displacement in the middle ear that stiffens the stapes, a small bone outside the inner ear. This stiffening limits the transmission of energy to the inner ear, where hearing damage takes place. In airbag experiments where the cabin is completely sealed and pressure is even higher, hearing damage is reduced even further.

Price’s study only included cars sold in the United States with front and side airbags. Under US regulations, American cars must have larger, more powerful airbags than cars sold in places such as Europe. Cars with smaller airbags sold in other parts of the world would likely pose less auditory danger when tested under identical circumstances, Price says.

The analysis was done using the Auditory Hazard Assessment Algorithm for the Human (AHAAH) model, which utilizes anatomical components of the ear’s structure to predict hearing loss due to exposure to intense sounds above 130 dB. It has been shown to predict hearing loss accurately in 95% of the cases in which human ears have been exposed.

NHCA Director of Education Brian Fligor praised Price’s work, saying it takes a revealing look at the side of new technologies people rarely think about. “We often consider only the benefits of safety technology, rather than the unfortunate potential side effects,” Fligor says. “This type of study highlights how common everyday occurrences present a very real hazard to our hearing.” Source: Written by Turner Brinton, American Institute of Physics’ Inside News. 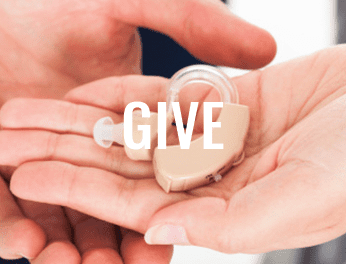 Hearing Aid Project Provides No-cost Aids to Those in Need