Back during the American Academy of Audiology convention last April in Charlotte, NC, I was brainstorming editorial ideas with Group Publisher Dave Galuppo when he was still the western and international advertising director and you could call him by his first name (kidding; you still can—as long as you say “Sir!” before and after), and he liked one concept enough to run with it after he was promoted.

Of course, there I was a couple of months ago thinking we’d debut the new feature with the new year, but Dave said, “Why put off today what—no wait! Why put off tomorrow what you can put off—I mean do—today!” and so we didn’t delay and instead we hustled our ears off, and I’m excited to say here it is.

I’m excited not just because of the enthusiastic response we received from the 14 companies that participated—Audina, Beltone, Bernafon, Magnatone, Oticon, Phonak, ReSound, Rexton, Sebotek, Siemens, Starkey, Unitron, Vivatone, and Widex—but because it enabled us to compile information on 32 of their instruments all in one easy-to-explore, easy-to-compare reference matrix that brings you the facts and features you want and need.

If I were a betting man, I’d wager this is one issue you might call a keeper—and that’s been my motivation practically from my start last year. Back in the November/December 2007 issue (my second), my editor’s message examined a critique of the magazine I received at my first trade show, the Academy of Doctors of Audiology convention last October in Orlando, Fla. I was told HPR was immediately disposable, and in response I wrote that I was going to strive to develop this magazine into a richer resource with a longer shelf life.

And this issue is just the beginning.

In coming issues, you’re going to find similar up-to-date coverage of all varieties of hearing instruments: thin/slim tube, conventional and power behind-the ear, full- and halfshell, in-the-canal, completely-in-the-canal, and more. And at some point we’re planning on turning our survey attentions to assistive listening devices and real ear testing and verification equipment.

So stick around and make some room on your bookshelf (and in your browser favorites) for the future of Hearing Products Report. I’ll bet you’re going to need it.

It’s All In Your Head 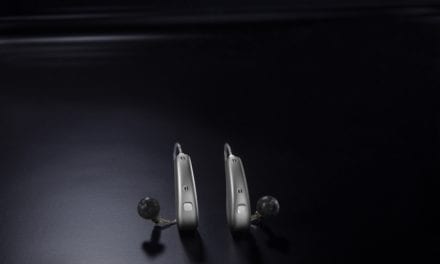