Audiology pioneer and professor John K. Duffy, PhD, died at his home in January. Duffy had suffered several strokes. He was 93.

After earning his PhD in 1949 at the University of Wisconsin, Duffy began his career by establishing the first academic audiology program at Brooklyn College in New York. He also established one of the first audiology and speech pathology centers at Lenox Hill Hospital in New York City. He was in charge of the Audiology and Speech Pathology Department at Kings County Hospital where his college students received their clinical training and where the patient load embraced every hearing and speech disorder.

On a Fulbright Scholarship at the invitation of the Indian Medical Association, Duffy traveled throughout India, setting up the first hearing and speech centers, and brought many Indian students to the United States for training.

In the 1960s, after a rubella epidemic in New York resulted in hundreds of babies born hard of hearing, Duffy—then at Lenox Hill Hospital—was among the first to place hearing aids on infants, followed by long, intensive therapy so that residual hearing could be utilized.

Duffy was among the first to sound the alarm against the overuse of antibiotics in young children with middle ear infections leading to ossified layers of the infected matter, resulting in hearing loss. He was also among the first to strive for the ending of too-early surgery on cleft palate children, a procedure with the potential for creating scar tissue in the palate, thereby stunting the natural growth of the upper jaw. A temporary plate to cover the cleft allowed the jaw to develop naturally. At several cerebral palsy centers that he served, he gave the gift of hearing to many disabled children and taught some of the most severely handicapped to communicate by using Morse Code with the eyelids.

During World War II, as a civilian, he was part of the Army Communication Center at Yale University. From there, he served in a military hospital, treating soldiers who returned from the war with hearing losses due to bombardment damage.

After retiring, he spent the rest of his career promoting a reading program for young children.

Duffy is survived by his wife of 66 years, Ruth, his son, Dr. David Duffy, and four grandchildren. He was preceded in death by his daughter, Jane. 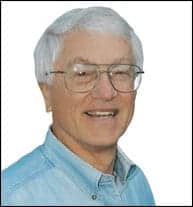 Using PDRs to Bring in Referrals